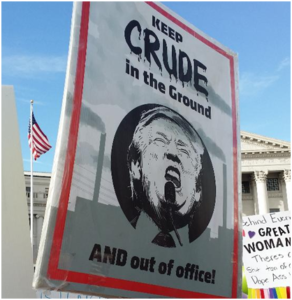 On the present danger:

“We spent more than two centuries building a great nation, and even a very stable genius probably needs a couple of years to complete its ruin.”

Roots of the DACA Debate. Since DACA is playing such a prominent role in the recent (future?) government shutdown, it’s wise to remember what’s at stake in all this:

“Hating and offending an innocent person, using him as a scapegoat, can only
strengthen the walls of our inner prison of confusion, isolation, fear, and loneliness;
it cannot free us. A house built out of self-betrayal will sooner or later fall down and
mercilessly destroy human life– if not that of the builder, then that of his children,
who will sense the lie without being aware of it and who will end up paying the full
price for this hidden arrangement.”

-Alice Miller, The Drama of the Gifted Child

Beyond Trump. I always appreciate thoughtful conservative critics of Trump (sometimes called the NeverTrump crowd). Here’s one conclusion from such a voice (David Frum):

“Perhaps the very darkness of the Trump experience can summon the nation to its senses
and jolt Americans to a new politics of commonality, a new politics in which the Trump experience is remembered as the end of something bad, and not the beginning of something worse. Trump appealed to what was mean and cruel and shameful. The power of that appeal should never be underestimated. But once its power fades, even those who have succumbed will feel regret. Those who have expressed regret will need some kind of exit from Trumpocracy, some reintegration into a politics again founded on decency.”

It’s long, but read it in full (Article attached): “An Exit From Trumpocracy,”
adapted from his new book, at:

Messages for Donald Trump. Here are a few signs from the Denver Women’s March and their messages to the Trump regime:

“Resist!”
“UNqualified, UNfit to govern. Wake up!’
“We cannot trust the fate of the planet in his tiny hands.”
“Stand up to the bully.”
“There comes a time when silence is betrayal.”
“Fear should not drive policy.”
“I have GOP PTSD”
“Left or Right: We can all see Wrong.”
“Thanks to you, #45, our nation might be waking up.”
“Hey, Trump, we will make a better world without you.
Thanks for nothing.”

Ask about our Wednesday morning meetings, our monthly Saturday afternoon meetings and upcoming events. CONTACT US